With just weeks remaining until the start of the challenge, Keystone Law’s Ian Down updates us on the team’s continued preparations for The English Channel Relay Swim 2022, in aid of The Light Fund.

Why another English Channel swim?
Umm, because it’s there?

So’s the Grand Union Canal, but you wouldn’t swim in that…
Err, okay, but it’s a challenge.

But you’ve done it before and that was a solo not six of you sharing the load. So if you know you can do that, how can you say a relay is still a challenge?
Sigh. No. It really is. You don’t understand. Every time it’s been different. Getting there is never assured, no matter who you are and how experienced or good a swimmer you are. Yes I swam two successful solos, but I also swam one which wasn’t. I also tried to swim in a three person relay to Calais and back – not only didn’t we make it, but I was responsible for being too ill to go back in the water for my turn, so we failed.

Being part of a relay is fabulous because you’re part of a team, but the pressure in case you fail is enormous. So if that happens, although everyone may be kind about it, there’s no avoiding the scarring can last a lifetime.

And another thing… hello?… have you gone?…oh, okay.

And so the conversations have seemed to have gone this last year, each time with whoever was asking the questions leaving the conversation more confused than when they started it, no doubt due to the emotional intensity of my reaction as the exercise of recollecting and explaining the nature of the challenge brought back a sudden rush of memories and images.

And, if I am honest, it’s the Leviathan-like ones that have most impact, with my doomed two-way Channel relay attempt taking top spot for the horror billing. Particularly now that I am fast heading back to what felt like my nemesis at the time 10 years ago when it happened.

That crossing, towards the end of the season was ambitious, involving a two-way relay with a team of three people alternating every two hours, rather than every one hour as we will be doing for The Light Fund. At the time, I felt I had good reason to feel confident though, having added a second successful solo crossing to my name just a month beforehand and swimming with experienced good friends and swimmers. 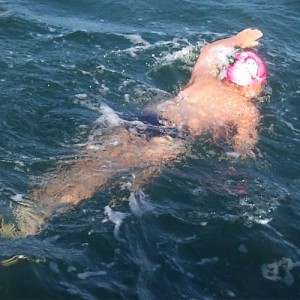 But the omens weren’t good – we were setting off towards the end of the season for the last opportunity the three of us could make and trying to squeeze within a brief weather window between two low pressure systems which would closely define the swimmable period. It meant that a textbook first leg would be critical taking no more than 12 hours and landing near the shortest point, Cap Gris Nez.

Things began unravelling, slowly at first, as the sea conditions began to get more unsettled. We were about to miss Cap Gris Nez by a whisker so it seemed. That would mean we would be swept at speed back up the channel away from the coast and towards the North Sea, adding many hours on to the crossing.

Our strongest swimmer went in and battled hard for two hours but was told afterward that the on-board tracker clocked his progress as a mere 200 metres towards France, no more. The currents on the French coast are brutal as the Channel here is shallow and you have a colossal volume of water racing through a relatively narrow space as the Atlantic Ocean meets the North Sea. My turn next and the story was much the same, although, finally, with a manic and depleting attempt to sprint most of it to break through, we did make it to rocks on to which I was able to scramble thus marking the completion of the first leg.

However, we were clocking in at 14 hours 39 minutes and time was running out. The weather was turning and the wind was getting up. I finished off my two hours and got out, exhausted. Over the next four hours the sea state became decidedly feisty and swimming conditions more brutal.

But it felt worse on-board, as my condition quickly deteriorated with the weather. I spent what seemed like a lifetime rather than four hours getting steadily worse with seasickness, as the Channel bared its teeth as waves started to throw the vessel around alarmingly, with us on it. Our crates of gear, although lashed down, were still being tossed and jostled by the force of it.

That’s when my nightmare really takes hold as I recall vividly being prone on the cabin-floor dry-retching for all I was worth and feeling every ounce of strength and will-power slip from me, as I watched the stern where I was meant to be heading with dread. Instead of the platform attached to the stern quietly ‘bobbing’ above the water, it was plunging alternately a metre or more beneath the water before rearing up to the same height above it, like a bucking bronco.

It was then that I felt a real and sobering fear for my life, in the certain knowledge – the sort of feeling that starts from the core of one’s guts – that if I tried to enter the water in my enfeebled state at that stage (which I was now dangerously close to being overdue to do for the start of my next leg), then I didn’t see myself getting back on the boat again, full stop. 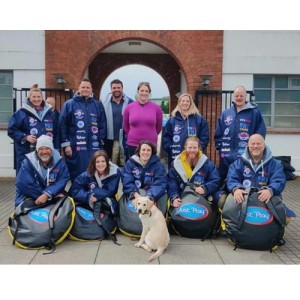 So that’s the long answer, but the headline is still the same – everyone in the squad has the same doubts, except one. Quite simply, whether it’s Stephen Gould’s team on escort vessel High Hopes, or my team on Optimist, as we motor round to Shakespeare beach in the small hours of the night to start our race, all I know for sure is that I will have my challenges just as everyone else will have theirs – up front and personal and whether they’re of our making or that of a higher power.

But what I do know is that I will be drawing strength from being a part of such an impressive group of people and I’m really looking forward to being with them as a result. And if you’d witnessed their dedication and commitment to the preparations and training for this relay, some from a standing start where the ability to swim front crawl had still to be mastered, you too would be impressed.

Please donate, donate, donate – we can’t think of a greater incentive to pull out the stops to reach out for French shores. Thanks for your continued support.

The English Channel Relay Swim in aid of The Light Fund is due to take place between 30 June and 3 July, 2022. For full details on the sponsorship opportunities, you can contact Stephen Gould, Mark Kingston, Simon Gresswell or Anne Bradford by clicking on their respective names. Everything you need to know about the swim can also be found by clicking here.

This month’s blog is kindly sponsored by Asgard Media.

“We’ve opened some very exciting doors, across all of our divisions”

Featuring… from LicensingSource.net to launch this autumn

The creative guide for the future

Miffy pops up at Westfield London for the summer

Cath Kidston put up for sale

“Barbie has evolved, disrupted, inspired and led from the front”

Laura Ashley and Mamas & Papas confirm new partnership
on July 1, 2022
The home and lifestyle brand is teaming with the nursery brand on a new collection of apparel and other products....

Challenge complete! The Light Fund English Channel Relay swimmers emerge victorious
on June 30, 2022
Team Optimist and Team High Hopes both safely reach the French coast having begun their epic challenge around 11pm last night; amount raised on JustGiving currently stands at over £202,000....
Get the latest news sent to your inbox
Subscribe to our daily newsletter