“Take the risk – it’s totally worth it”

Sophie Jonas-Hill is a designer and brand owner. She entered the Kelvyn Gardner License This! competition at Brand Licensing Europe 2021 and won the Brand & Design category. LicensingSource.net catches up with her as entries close for this year’s competition (26 August).

Tell me a bit about you and your story to this point?

I guess I’ve had an unconventional career history. I’ve always prided myself on being very applied, yet I’ve never had a proper job in my life.

I’ve run my own business as a wedding dress designer. I got a first degree in metal work and started making jewellery, and then I saw a gap in the market to make wedding head dresses. They were quite mediaeval, and my brides loved them so much they started asking me to design their dresses, too, so I went to London College of Fashion and took evening classes in pattern cutting.

I was very good because my brain is wired for translating flat images into 3D. So, I found a dressmaker to work with. After a few years, we came to a point where – to survive – we’d have to upscale massively to mass produce (there was a lot of undercutting, and people paying for designs then getting someone in China to create them) and we’d started a family, too, and I couldn’t pay someone to cover my maternity, so we closed the business down.

The big problem with being self-employed, of course, is that you have got no one to write a reference and that makes it really difficult to try and get a ‘normal’ job. So, I designed a children’s garment based on a Japanese kimono after trying to change my daughter at 3am and concluding it was like trying to put an octopus in a string bag.

I did a trade fair with my design, but sadly it coincided with the 2008 crash, so no one wanted to take a risk. I found a factory in India to make the garments sustainably, but it got held up by gangsters. Life really does throw curve balls at you.

Then I worked as an ante natal tutor, but Government funding was axed, and next a job supply teaching, which I loved but I can tell you now, I’d rather speak to captains of industry than Year 8s on a Friday.

When a career advisor job came up, I realised I’d need a qualification, so I got funding to do an MA, but got distracted by the Illustration MA. It was brilliant, I loved it and it reconnected so many different parts of who I was. 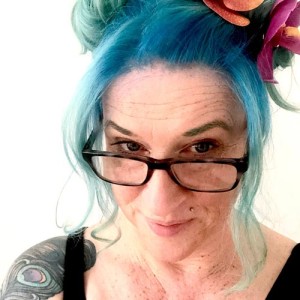 How did Tea for Tattoo come about?

During the MA, I developed the practice of drawing on tracing paper with certain inks, which gives it a luminescent quality like ceramic. And when my best friend turned 50, I designed a motif of her favourite things and had it applied to a Delft-style teapot as she’s Dutch. The man I sourced the teapot from owns one of the last firms in UK who still produces everything in Stoke with Cornwall Clay, and he thought my stuff was really original.

It was then I discovered the Kelvyn Gardner License This! competition so I downloaded the form, which was quite detailed and a really useful exercise for me. The judges really liked my ideas but asked me to refine my concept and that was when Tea for Tattoo happened – so many people have body art now and I love the way it combines prison tattoos with pretty ceramics and cake.

I knew nothing about licensing at the time and the Kelvyn Gardner License This! final was frankly my best stand up gig ever because – as you know – I won the Brand & Design category.

Do you have a favourite piece of body art?

I do – it’s on my legs, winged hearts on both shins done by David Beckham’s former tattoo artist.

What’s your favourite cup of tea?

That’s easy: Yorkshire biscuit tea, it tastes like you’ve dunked a biscuit. There’s even footage of me drinking tea at a nightclub because I don’t really drink alcohol. 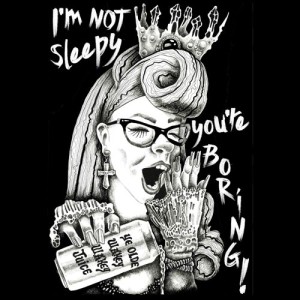 What’s happened since? How have you benefited from winning the License This! competition?

Quite a few things. The judges have been amazing. Sarah Lawrence took me to Spring Fair. Ian Downes has introduced me to people and been so supportive. Sarah Ward at the Giftware Association has given me advice on how the industry works. That was so useful, because you don’t think about what comes afterwards when you’re so focused on the creative side of things.

Of course, one of main things was meeting Phil King at Trademark Products who got in touch to say he liked my style and wanted to work on a project with me. I set myself the task of doing gothic freak show avatars based on horoscopes for use on posters, but Phil rightly pointed out that 12 designs means you’re chopping your audience into 1/12 for each poster.

So instead, I’ve designed quite dark illustrations inspired by Snow White, Little Red Riding Hood, Cinderella and Sleeping Beauty and the t-shirts went live in HMV in July 2022.

To me as a teenager, HMV was the coolest shop you could go to. It’s so iconic, especially the Oxford Street store, and it’s amazing to see how they have saved this brand in face of all the changes that have happened in music culture. 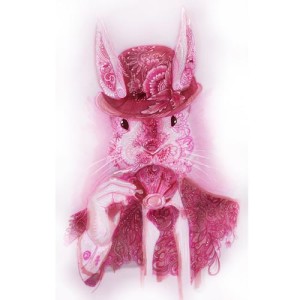 Do you have an agent?

I’m in discussions with an agency and we’re on the verge of signing a contract.

Will you be at BLE?

I will be at BLE as me on my own stand, and I’m hoping to have signed with the agent by then, too. I’ll be having meetings around all of my designs – not just Tea for Tattoo. My plan is to build a brand.

Where to next? What categories and retailers are top of your wish list?

I would love to see my designs featured on apparel, stationery, homeware, wall art, beauty – ideally products aimed at the late teen, early adult market, products for your first home away from home.

I do also love working with ceramics, so Anthropologie, Habitat, After Noah, even Skandium because a lot have a Scandinavian feel to them.

Where do you want the brand to be in five years?

I’d like my signature to be recognisable – I’d like people to say, ‘That’s Sophie’s stuff.’ There’s a brand called Powder which I love. She has imagery on apparel, one off and small range packaging. It’s a very strong look that’s evolved over time.

What would you say to other designers and brand owners about entering License This?

Absolutely go for it – there’s no guarantee but like I always say you can never win if you don’t enter and if you do nothing, then nothing will happen. You really do need to engage and take part. Take the risk – it’s totally worth it.

Brand Licensing Europe runs from 20-22 September at London’s ExCeL. Visitor registration is open and can be completed via this link.

Brand Licensing Europe 2022: “The ambience and atmosphere was electric”

“Consumers will be looking for something that delivers something meaningful”

Barbour and Brompton get back in the saddle
on September 30, 2022
British heritage brand, Barbour has once again teamed with bicycle maker Brompton, following on from its successful collaboration back in 2017....

"Licences inspire trust and confidence"
on September 30, 2022
MV Sports' Phil Ratcliffe on how licensed properties will be protected to a certain extent from the cost of living crisis impact....

MGM builds momentum for hotly tipped Wednesday debut
on September 30, 2022
Spanning across all categories, MGM’s robust line-up of new products and partners will include apparel, collectables, gaming and more....

17 of the biggest things you won’t want to miss at SILC 2022
on September 29, 2022
With the Sustainability in Licensing Conference now just four weeks away, we're honouring the United Nations' 17 SDGs with 17 things you won't want to miss at this year's event....
Get the latest news sent to your inbox
Subscribe to our daily newsletter