Start Licensing’s Ian Downes discovers that licensing is well represented at retail at the moment, as retailers all look to stand out during the competitive festive season.

There is no question that retail has gone full Christmas now. One measure of this is the fact that most of the major retailers have launched their Christmas TV commercials.

One that stands out from the crowd from a licensing perspective is Asda, which has developed its ad using clips from the iconic Christmas film Elf. It is cleverly done and makes good use of the talents of Will Ferrell. It is a great example of ‘clip licensing’ and I would imagine a great boost for the Elf brand. It should be an example that will inspire other advertisers to think about using licensed brands in this way.

Using a character like Buddy and a film like Elf helps Asda cut through in a cluttered marketplace and adds value to its media spend. The commercial has generated a lot of PR coverage and social media chat. 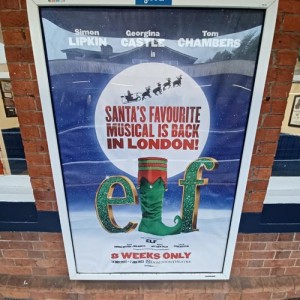 My straw poll of Twitter suggests that consumers love the commercial although there were a few gripes about the editing, but overall I would imagine all those involved in it are delighted with the reception and coverage it has got.

Looking online I think Asda is also stocking Elf products which makes sense and is, of course, a further benefit of this kind of partnership.

Elf is certainly becoming a Christmas fixture and to reinforce this point I noticed that Elf the Musical is back on stage in London’s West End. It is being well promoted on billboards declaring ‘Santa’s Favourite Musical is Back in London’. Will be interesting to see how Elf develops in the Christmas licensing market and what impact the deal with Asda has in terms of other retail coverage.

Superdrug is a retailer that leans on licensing at Christmas and it also still invests in a printed catalogue which showcases highlights from its Christmas range. Superdrug also likes to feature brands on an exclusive basis. One such range is a RuPaul range – the range has a double page spread in the brochure and a prominent display in-store. The range includes gift sets such as eyeshadow sets and lip glosses. There is also a RuPaul fragrance.

Another prominent brand in-store is Peaky Blinders with products such as Wahl’s multigroomer kit and a toiletries gift set that includes a bottle opener. Peaky Blinders is a strong brand for male gifting and it is easy to see why a retailer like Superdrug would back it. Other featured licensed brands include The Grinch, Disney, L.O.L. Surprise and Spider-Man. Most of these brands are being used to target children’s gifting. They feature some nice innovation such as shaped bath fizzers. 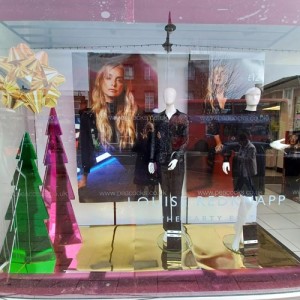 Christmas is also party time and retailers have recognised this, developing campaigns to reflect this. One example is clothing retailer Peacocks which is working with TV personality Louise Redknapp. She has created a ‘party edit’ apparel range which is being promoted prominently in-store including window displays. Working with personalities like Louise Redknapp can help build social media content and helps create a point of difference.

Peacocks has also made good use of its high street presence by developing window displays to showcase the range – a good example of mixing your marketing messages to take advantage of traditional and newer ways of engaging with consumers. 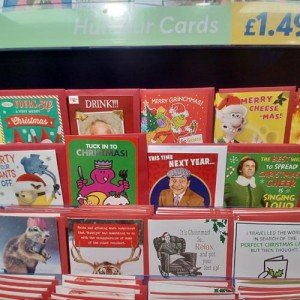 Another retailer that is fully immersed in Christmas is Card Factory. In its core category of cards it is using a range of licences in its Christmas range. It is good to see licensed brands being used in such a bespoke way with specially created visuals to reflect the Christmas theme. Examples include a Superman card with the caption My Husband My Hero; a Disney Princesses’ Niece card; Wallace from Wallace & Gromit wishing you a Merry Cheese-mas and our old friend Buddy from Elf.

Across all categories licensing and bespoke designs featured prominently, reinforcing the value in investing in design. Card Factory has also got a number of licensed calendars including slimline ones such as Only Fools and Horses keenly priced at £1.49. 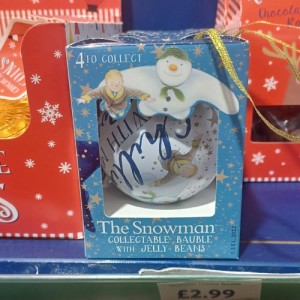 Card Factory is a retailer striving hard to sell products at value prices and has cleverly integrated licensing into this strategy. It is also carrying ranges of well priced gifts including gaming brands such as Xbox and PlayStation, while it is also selling confectionery gifting lines such as chocolate advent calendars including Jurassic World, Barbie, PAW Patrol and Peppa Pig. The Snowman also features in the food gifting category with a gift pack Collectable Bauble with Jelly Beans from Rose Marketing. Card Factory also stocks a focused range of toys and games. This is not heavily skewed to licensed lines but the evergreen Peppa Pig is featured.

Judging by my retail visits this week it should be safe to ask Santa for a licensed gift this year – licensing is well represented at retail at the moment. That is an encouraging for licensing and maybe suggests that retailers are recognising that licensing can help them achieve their objectives particularly in a competitive retail season.

The Point.1888 to grow Clean Kitchen Club into licensing

How the World Cup is scoring in new ways in licensing

Footfall predicted to rise over 15% on Black Friday

Brands & Retail UK Winter Conference takes shape
on November 25, 2022
The conference - which is sponsored by Fabacus - is due to take place on 18-19 January, 2023 at the Wellcome Collection Museum in London....

The Source jobs board: SEGA
on November 24, 2022
The company is looking to welcome a new licensing coordinator to its UK-based team....

Yomiuri Giants, Nike and Fanatics team on long-term partnership
on November 24, 2022
The most successful Japanese baseball team in history will be the first professional global sports club to adopt innovative three-way partnership model for on-field products and licensed fan merchandise....
Get the latest news sent to your inbox
Subscribe to our daily newsletter