LicensingSource.net catches up with Anderson Entertainment’s director, Jamie Anderson to talk future plans for the company, how he is continuing his father’s legacy and how ultimately it all comes down to the best way to tell the story. 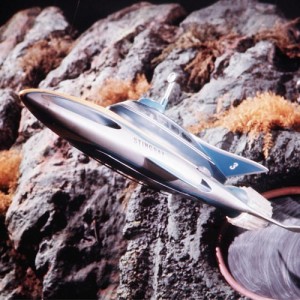 Was it always your plan to follow your dad into the business?

I grew up watching dad making cool stuff. When I was born, he was making Terrahawks, and as I was growing up he was making commercials – and then there was the big resurgence in the early 1990s when the BBC picked up Captain Scarlet, Thunderbirds, Stingray and other shows. Suddenly my friends and their parents thought that my dad was cool. It’s a very short, rare period in any kid’s life when their dad is cool, so it was pretty intoxicating. It was also exciting to see the process of ‘mind to screen’, and how his creativity manifested in that way. I told him, I want to do what you do. He tried his best to put me off for a very long time because he felt TV was a tough business, and it was only towards the very end of his life that he had a change of heart.

What do think makes Gerry Anderson shows so well loved?

It’s a brand of entertainment that you don’t really see anywhere else. It has its own niche in the same way that Doctor Who, Star Trek and Star Wars do. And there’s an optimistic, utopian nature to shows like Thunderbirds, even when they’re Cold War-inspired or have conflict at the centre of them. The worlds they inhabit are very positive – tech driven, inhabited by groups of selfless people trying to do their best against all odds. I think we probably need that more now than we have done for a few decades.

Can you tell us how Anderson Entertainment operates, and what rights you hold?

We hold various audio, publishing and merchandising rights for the classic series including Thunderbirds and Space: 1999 through our agreement with ITV, but for the newer series including Terrahawks and New Captain Scarlet we own all rights such as audio, digital, film, publishing and TV.  So yes, we are a licensee of ITV, but over the last seven or eight years, we have gone from being what I’d call a ‘distant licensee’ to a close partner.  We signed a cross-category deal with them that has massively expanded the scope of what we can do. We’ve progressed from just producing branded caps and T shirts to now creating collectables, cosplay, stationery, gifts, comic anthologies, novels and full cast audio dramas – pretty much anything you care to name.

We have an extremely close connection with fans, whom we engage with through our social media channels, the new AnderApp and of course the  Official Gerry Anderson Store, which is a hugely important revenue stream for us.

Are there any markets in which Anderson Entertainment properties perform particularly strongly?

The UK is our major market, because whereas some IPs are stronger in certain territories, pretty much every property has some significant recognition in the UK. Second is North America – Space: 1999 and Fireball XL5 are the big IPs out there – then we’ve got Japan, where there’s still a great fondness for the Supermarionation-era shows, and also live-action shows like UFO and Space: 1999. Then it’s Australia and New Zealand, Europe, South America… I think we sold product direct to consumer in 110 territories last year. The market is widespread, and it’s not just confined to English language territories.

You’re a big advocate of the direct-to-consumer model, Jamie. What do you think are the advantages and disadvantages?

We started selling caps and t-shirts direct to fans in 2014, and then we started getting very direct requests from them for certain things. There’s a speed element to DTC where you get immediate feedback. You don’t have to wait to go through other retailers who then do or don’t have success with a product, and if it fails you don’t know whether that is to do with positioning, or competition with their own material, or shelf space.

We use Shopify as our platform for e-commerce, and things are going very well; we were in their top one per cent of fastest-growing merchants at the end of 2021.

Having an ‘owned’ audience that we sell to directly means the margins are significantly better. However, if we get things wrong, it’s on us.

The direct feedback from fans is crucial, because they ask for specific things. When we did our Space: 1999 Moonbase Alpha Technical Operations Manual last year, there was a flurry of people asking for one for UFO, so we were then able to bump that up in our development roster and publish it last month.

Fans have lots of ways they can communicate with us. We have active connections across pretty much every major social platform, even TikTok on a small scale, and as the ‘friendly face’ of the brand, I host a weekly podcast, which has a very loyal listenership. 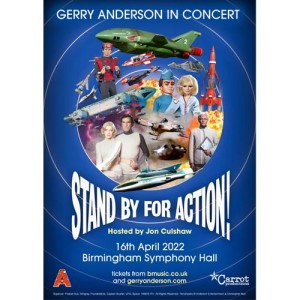 What kind of things do you do to engage with fans on an experiential level?

We did a concert at Birmingham Symphony Hall in April [Stand By For Action! Gerry Anderson in Concert, available now on Blu-Ray and DVD], hosted by Jon Culshaw. It featured soundtracks from six decades of shows, played by a live symphony orchestra. The shows had such great scores, they really embedded themselves in people’s memories. You only need to hear a couple of bars and you know instantly where you are.

We’re also getting back out to conventions again; we’ll be at London Comic Con Winter in a couple of weeks’ time. We’re looking forward to interacting with fans. They tell us stories about what the shows mean to them, or how they inspired them to go into a line of work, whether that’s working for the European Space Agency, in medical research or in A.I. We also meet a lot of people for whom the shows were a shelter from emotional trauma. It’s amazing to hear how the shows connect with people from all walks of life and still mean something to them, 20, 30 or 40 years on from their first viewing.

How are you trying to engage younger viewers who didn’t grow up with the shows?

The shows are definitely ‘retro cool’ in their technical and aesthetic aspects. And how many other kids’ shows feature cocktail-swilling, cigarette-smoking puppets? I think that combination is quite enticing, but we’re doing a lot of other stuff outside of simply making the shows as accessible and as available as possible. This year we published quite a dark Captain Scarlet graphic novel, based on the 2005 New Captain Scarlet TV series, called Operation Sabre. We also produced an Anderson-inspired audio drama called First Action Bureau [watch the trailer here], starring Paterson Joseph and Nicola Walker, which we’re aiming to develop further. It’s ‘grown up’ sci-fi – think Killing Eve meets Minority Report. We also have numerous TV projects currently in development.

I’m medium-agnostic when it comes to new projects. Whether it’s digital, in the metaverse, or traditional publishing, it comes down to the best way to tell the story. It’s about being where consumers are, delivering content and merchandise in the way they want to consume them, whether they like listening to things, watching things, collecting things or reading things.

What do the next five years look like for Anderson Entertainment?

I’d love people to refer to Anderson Entertainment as the UK’s independent answer to Marvel!

Looking ahead, we want to do two things: we want to continue to develop new IPs that are true to the original Gerry Anderson ethos, and we also want to look at evolving the brand. The last one is more complicated, because it involves changing things that a lot of people feel shouldn’t be changed. A lot of reinventions of classic brands fail, probably because of the expectation surrounding them, although I think Marvel, and Lucasfilm under Disney, have done a pretty good job in terms of bringing a new audience to cinemas and TV.

The set-up for most of our shows seems ripe for video gaming, so we’re open to that, and to live action, CG animation and anything else. All IP owners are increasingly looking to the metaverse, and there’s no reason why the characters, and the vehicles in particular, shouldn’t make that transition. The important thing is that whatever we do, it has got to be authentic.

“Parents will be looking towards brands that they know and trust”

Hunter Price sets tails wagging with new PAW Patrol deal
on January 31, 2023
The company has secured a deal with Paramount Consumer Products UK to develop an extensive range of products based on hit preschool brand....

WildBrain CPLG adds Italy and India to Hasbro and eOne remit
on January 31, 2023
In addition, the agency's existing representation deal has been renewed, under which it handles Hasbro/eOne’s portfolio of brands in CEE, Benelux, the Nordics and Turkey....

"Parents will be looking towards brands that they know and trust"
on January 31, 2023
MV Sports' Phil Ratcliffe on the licences which are in big demand right now....

"We are starting to see increased new category opportunities"
on January 30, 2023
Mike Coles, group md at Blues Group, on changes in strategy beginning to bear fruit and increasing sales year on year....
Get the latest news sent to your inbox
Subscribe to our daily newsletter