Start Licensing’s Ian Downes kicks off a new year of Looking Out with trips to Claremont Landscape Garden and Bristol, finding some varied licensing initiatives.

As a Licensing Lookout it is essential to get out and about sometimes. There is only so much you can see from a couch.  I managed to get off the couch a few times during the Christmas and New Year break. My endeavour was rewarded by a couple of noteworthy Lookout finds on my travels.

I visited Claremont Landscape Garden, a National Trust site in Esher, Surrey. It is always a nice place to visit and I would put myself in the frequent visitor category. In recent years, the National Trust has added a children’s playground to the site and seems keen to promote Claremont as family friendly. This seems to be a move across the National Trust as it future proofs itself and ‘recruits’ a new generation of supporters. 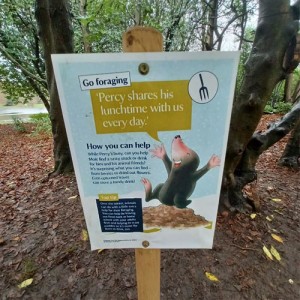 So against this background I guess it was no surprise to see that at Claremont the National Trust was running a Children’s Activity Trail in conjunction with an IP owner (pictured left). The National Trust was using Percy the Park Keeper to theme a Children’s trail. The trail was supported by an Activity Pack which was available to purchase for £2. The trail was also supported by signage and feature areas at Claremont. I believe Percy the Park Keeper is being used at other National Trust sites as well.

I bought one of the Activity Packs and it seemed to be good value for £2. It was a paper-based activity pack. On the day I visited it was relatively late in the day and a little overcast so not the busiest of days visitor wise, but the families that were there seemed to be participating in the trail and enjoying it. It certainly adds another dimension to a National Trust visit for families with younger children and I guess overall makes National Trust sites more family friendly.

It is a good example of IP being used in different ways beyond product and a good example of how IP can be used proactively to target specific consumer groups. As an IP owner it is always worth knowing who your core audience is. This can be very useful when selling in opportunities to partners like the National Trust.

I also ventured to Bristol during the Christmas break and again spotted some interesting ‘live licensing’. Bristol is one of the UK’s foremost locations for street art. There are hot spots for street art throughout the city and Bristol hosts the annual Upfest street art festival. Banksy is also known to visit the city from time to time.

It is also the home of Aardman, which recently launched a new film with Netflix, Robin Robin. As part of this launch and to help promote the release, Aardman and Netflix created a street art trail in Bristol. This was in conjunction with Upfest and features artwork from Alex Lucas. There are 11 Robin, Robin artworks in the city and these are all featured on a downloadable trail that people can follow around the city.

As a street art fan, I really enjoyed spotting some of the artwork and it was also really nice to see quite a few families walking the trail. It was also nice to see a few older pieces of Aardman-inspired street art in the city that are a legacy of past Upfest events. Street artists provide a new take on the characters. 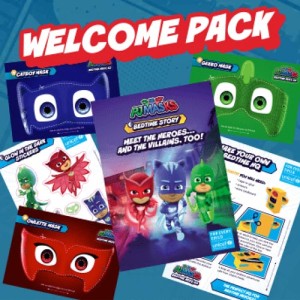 When I was back on my couch I noticed a couple of interesting character-led campaigns that charity UNICEF is running.

I spotted the first one via a TV advert. This featured PJ Masks and was a direct response campaign. The PJ Masks campaign is entitled Bedtime Heroes and revolves around a monthly subscription. Consumers sign up and commit to the programme, then receive a Welcome Pack and a monthly Bedtime Heroes pack every month for a year I believe.

The programme is reminiscent of a continuity or partwork series. The website for the programme sets out that ‘PJ Masks will deliver a monthly pack through the letterbox filled with moral-building stories, engaging activities and fun items that help your child relax before bedtime’. The monthly fee is £10 and the PJ Masks promotion seems to last a year, after which consumers can carry on with a monthly donation to UNICEF. 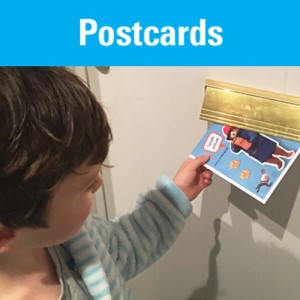 The other UNICEF campaign I noticed was centred on Paddington and came to my attention through Instagram and Facebook adverts.

This campaign was similar in structure to PJ Masks, but the promotional and product mechanic was based on postcards – Paddington’s Postcards. The editorial concept centred on Paddington and his travels. Other items in the package include a World Map and a Travel Journal. I am guessing UNICEF see these character-based campaigns as ones that will resonate with parents (and grandparents) and cut through in a cluttered marketplace.

Charity fundraising is a complex and competitive sector. Seemingly charities are seeking out new ways of engaging with the public and fundraising. As these campaigns show, there is also a value in locking in consumers as long-term supporters who donate on a regular basis via standing orders. These sort of character-based continuity style programmes really help with that objective. 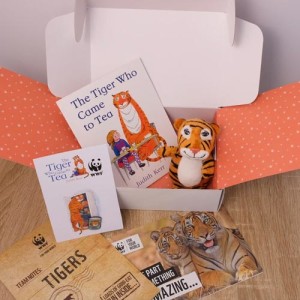 UNICEF is not the only charity undertaking campaigns like this, as I also saw a number of online advertisements from WWF featuring a promotion and product range themed around Judith Kerr’s The Tiger Who Came to Tea.

The range included a Tiger Protection Adoption Kit and an exclusive apparel offer. It is also worth noting that cause-related marketing agency Louis Kennedy is in the final stages of launching its Blu Gobin ecommerce platform which will be selling limited edition merchandise featuring a range of IP in conjunction with charity partners. I am working with it and my client The Ashmolean Museum on a range of limited edition prints. This should open up more opportunities for the licensing community to engage with the charity sector.

I also saw an off the page offer in the Royal British Legion magazine for a Legion Poppy Bear. The bear is a limited edition bear developed by manufacturer Merrythought and is marketed by Award. Limited to 1921 bears (to tie into the year the Legion was launched) and selling for £145, the Legion Poppy Bear is another good example of how charities are using licensing and licensed products to boost their fundraising. In this case it is also good to see a prestigious brand like Merrythought involved with licensing and fundraising. Charity fundraising and partnership is clearly a sector to keep an eye on in 2022 and I expect to see some further interesting developments in the category.

Talking of charity fundraising and also getting off your couch – spare a thought for the intrepid Light Fund swimmers who have been training for their Channel relay swim over the festive period in what must have been very challenging conditions. I wish them well. I look forward to following their progress over the next six months.

It is worth following the swimmers on Instagram – @lightfundchannelswim22 – very inspiring stuff and the perfect feed if you like looking at giant waves. A very good example of licensing engaging with the charity sector!

ZenWorks and Kensin enter the metaverse with Samurai Animals

New sustainability award joins the Brand & Lifestyle Licensing Awards 2022
on January 20, 2022
The new accolade will recognise and reward the sustainable credentials of a brand licensed product or range; entry deadline for all categories is Tuesday 8 March....

Moose Toys showcases new Octonauts toy line
on January 20, 2022
In partnership with Silvergate Media, Moose will release vehicles, figures, plush and play-sets based on the preschool hit and its new series, Octonauts: Above & Beyond....

ZAG secures global deal with PMI for Miraculous brand
on January 20, 2022
The global licensing deal with the Tel Aviv-based company includes a line of collectables, impulse, stationery and school supplies....

Vintage Disney sketches inspire newest Primark collaboration
on January 19, 2022
Described as 'archive sketchbooks meets wardrobe staples' by the retailer, the new collection features Mickey and Minnie Mouse, as well as Bambi....
Get the latest news sent to your inbox
Subscribe to our daily newsletter